We saw the movie Whiplash last year, and frankly we don’t think any of us knew what it takes to be a world class drummer. But we can now put our assumptions to the test using this smashing little browser game from Concert Hotels which challenges us to keep a steady rhythm even after the beat has faded away. As it’s Friday and music is usually powering through infogr8’s walls we did a little team competition. You’d think that ones rhythm matters most but be warned, devices matter too! So we mixed it up, using a mouse, a trackpad and a Wacom tablet. No surprises, the trackpad and the tablet turned out to be the most precise! We especially like the visualisation at the end which tells us if we were rushing or dragging. Choose your “drum sticks”, plug in your headphones, turn up the volume and see how closely you can stick to the beat.

What is it that gives you the heebie-jeebies? In a worldwide survey it was climate change that topped the list, with economic instability and ISIS following closely behind. A frighteningly good interactive from the Guardian visualises the responses from 40 countries and allows us to explore what issues strike fear into different folk. Americans apparently are not that concerned with climate issues brought on by the greenhouse effect, they are the more anxious about cyber-attacks and Iran’s nuclear program, whereas those living in Ukraine are unsurprisingly worried about tensions with Russia. It’s also interesting to see what issues give different countries the least concern, with China seemingly not giving two figs about anything. As we seamlessly segue into our next ICYMI find, our guess is that climate change will become much more of a concern for Americans at some point down the road.

What 12 Months Of Record-Setting Temperatures Looks Like Across The U.S.

Moaning about the unpredictable British weather has become something of a national institution, however we have recently noticed an unusually frequent amount of chatter on social media from our American friends chiming in on the subject. From the bitter cold snap felt by New Yorkers at the tail end of winter, to the severe heat wave and droughts in Los Angeles, it seems the country has been given plenty to talk about lately. This has undoubtably been a record setting year overall, however each city has a unique story to tell. To help us understand what has been going on, Randy Olson from FiveThirtyEight has compiled 12 months of recently recorded temperatures and overlaid these onto historical readings to produce a series of charts which allow us to see how extreme this year has been. Seattle certainly has been feeling the heat lately, with 13 days this winter setting new record highs that would not feel out of place in a typical August. The British climate suddenly feels quite tame in comparison.

A World of Information

Unfortunately our planet didn’t come with an instruction manual, however if it did we would want it to to feature diagrams as beautifully crafted as these. Our lead designer Ben visited an exhibition at Stories in East London at the weekend which features a range of gorgeous information design prints by UK designer and illustrator James Brown. The collection goes some way to help explain some of the complex phenomena in the world around us. If you are curios to learn more about cloud formations, phases of the moon or how the tides work, this collection has all the answers, and so much more. They will be on display until August 23rd, so make sure you check them out.

How much do you think your home contents is worth? Probably more than you would think. Gocompare.com reckon that many people tend to overvalue their property when arranging home insurance, but often undervalue their contents. It’s easy to see why. We often forget to consider the little things like freezer contents and toiletries, but they all add up. To help us put a value on our hard-earned possessions, they have created a calculator that prompts us to value objects room-by-room that we may not have previously considered. We took a generous guess at the value before starting, however we still arrived at a whopping sum that took us by surprise.

What exactly makes a film noir? Well, noir means black. And film means film. Sadly this doesn’t really help us that that much, however the BFI have come to the rescue by proudly presenting an infographic to helps us identify movies from this classic sub-genre. Featuring deliciously dark illustrations from Melanie Patrick  and Adam Frost we are shown all the hallmarks to lookout for, and discover which is the ‘noirest’ film ever.

Have you ever noticed that time seams to whiz by faster and faster as we get older? No, there isn’t a problem with the space-time continuum, and you don’t need the brain of Albert Einstein to figure out what is going on. You see, it’s because we perceive time relative to the ‘absolute’ time we can compare it to. Is your old, tired brain still not getting it? Well this scrollable story from Austrian designer Maximilian Kiener will no doubt put your mind at rest. Imagine you are just four weeks old again where a week is a quarter of your life. By the end of your first year, a week is now a fiftieth of your life, which feels a lot less significant. The site allows us to scroll through 100 years, with time seemingly accelerating as we reach our centenary. Life’s too short, but it feels a whole lot shorter now.

Every Possible Emotional Overlap in Inside Out 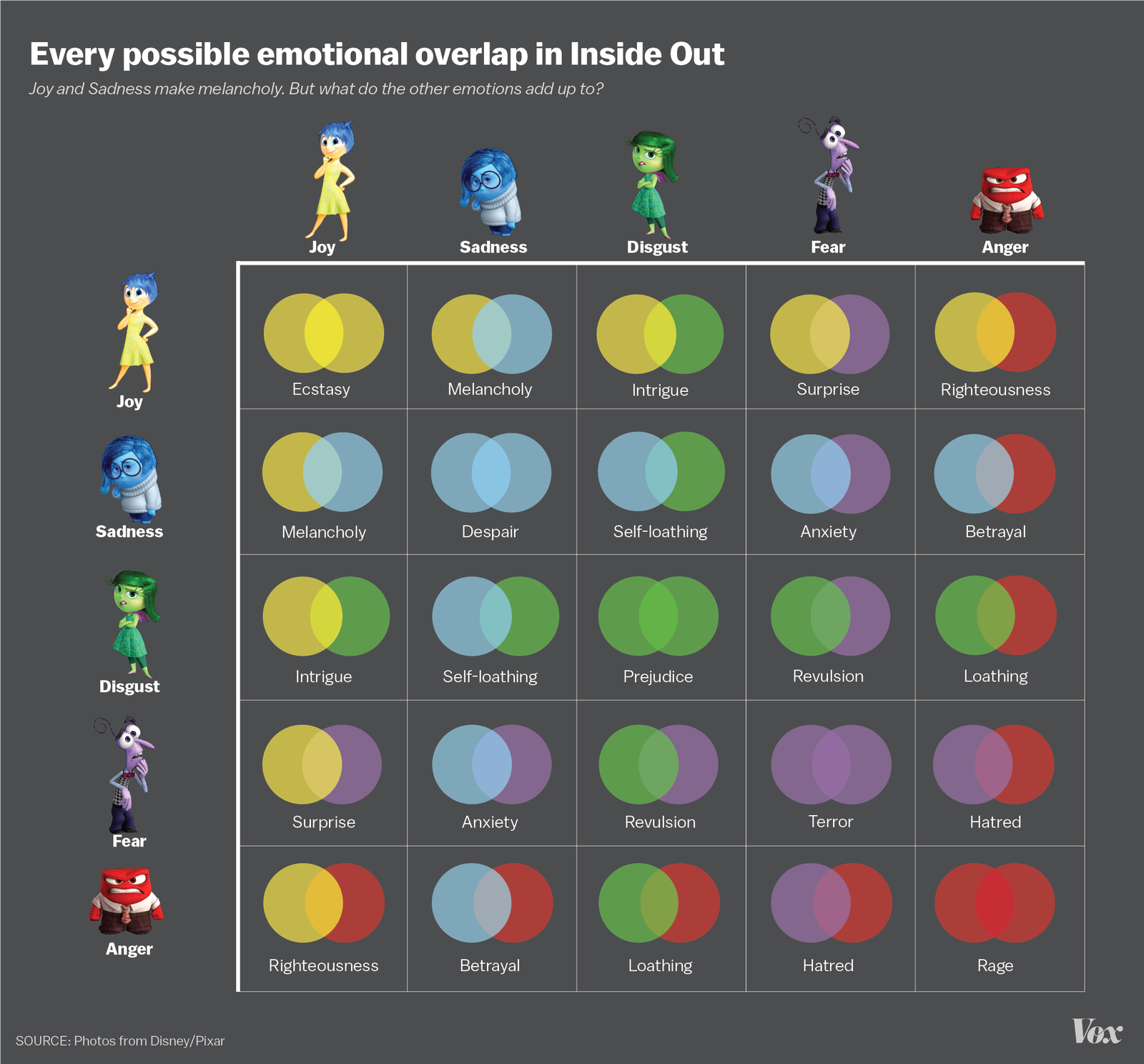 Pixar movies typically take us emotional roller coaster, and with Inside Out released in Cinemas from today we are once again buckling-up for what is hopefully an amazing ride. This time the stars are the five emotions inside a young girl’s head, and as time passes we see them merging into newer, more complex feelings. But how exactly do we express sadness mixed with joy, or disgust with fear? For those of us not quite in-tune with our inner selves, Christophe Haubursin and Vox have produced a handy table to keep our emotions in check. We wonder how many we will experience when watching the movie itself, knowing Pixar it will probably be the whole lot.

New Talent and Familiar Faces: Who Made the FIFA 22 Best Players List?

3 of the best visual trackers showing progress towards hitting SDGs